30 € Per Person Request to Book

Istanbul Morning City Tour is a half day guided tour. See the sights of Istanbul on a half-day tour that takes in the city’s famous historical landmarks and cultural sites.You’ll see Hagia Sophia, the Hippodrome, the Blue Mosque and the Grand Bazaar. Entrance fees are included,as is hotel pickup for your convenience.

Haghia Sophia: 6th century of the magnificent Hagia Sophia museum, the historical peninsula's most famous and most visited .Mozaik and our day and age the works structure where you can admire the dome in size which amazed even human, Blue Mosque and is located a few steps from the Basilica Cistern.

According to the Byzantine historian of the first Hagia Sophia, the emperor Constantine the Great traffic son of Constantine was built in 390 years. The first basilica planned structure made with wood and burned completely. Today's construction began in 532 when the Hagia Sophia and the time of Emperor Justinian in 537 yl opened in worship. In this project, two architects worked together Anthemios Isidoros of Miletos and Tralles. Where about 10 thousand workers during construction and it is mentioned that impataror spend a large fortune.

Blue Mosque: The Sultan Ahmed Mosque or Sultan Ahmet Mosque is a historic mosque located in İstanbul. Turkey's Historic Centre.A populer tourist site.Sultan Ahmed Mosque continues as a mosque today with men kneeling in prayer on the mosque's lush red carpet after the call to prayer.Construction of the Blue Mosque ,as it is popularly known,was built between 1609 and 1616 during the rule of Ahmed I.ıts Külliye contains Ahmed'stomb,a madrasah and a hospice.Magneficent hand-painted blue tiles adorn the mosque's interior walls and at night the mosque is bathed in blue as lights frame the mosque's five main domes,six minarets and eight secondary domes.

Hippodrome and Obelisks: Hippodrome means square for horses.The Hippodrome was builty by Roman Emperor Septimius Severus towards the end of the 2nc century and it was extended to an immense size by Constantine the Great.Some historians claim that it could seat thirty thousand spectators, while others put the figure at sixty thousand.The main attaraction was the two or four-horse chariot races.In Romen and Byzantine times,the Hippodrome served as the city's maim meeting,entertainment and sports center until the 10th century.

Like many of the other monuments in the city, it lost its importance wit the Latin invasion in 1204.Besides the chariot races and gladiator fights with wild animals,there were performences by musicians,dancers and acrobats.There were many public holidays during Roman times to allow oppotunities for all these activities.

Only the round southern end of yhe vast Hippodrome has survived.This is a brick structure decorated with tall vaults.In later ages,all of the stone blocks and columns of the Hippodrome were used for building meterial.The ruins in the park to the right of the entrance to the Hippodrome belond to 4th and 5 th century private palaces and a little further along there are there are the remains of the Byzantine Hagia Euphemia church.

Grand Covered Bazaar: The Grand Bazaar (Turkish: Kapalıçarşı, meaning ‘Covered Market’ also Büyük Çarşı meaning Grand Market’in Istanbul is one of the largest and oldest covered markets in the world with 61 covered streets and over 4,000 shops which attract between 250,000 and 400,000 visitors daily.In 2014 it was listed among world's most-visited tourist attractions wit 91,250,000 annual visitors.the Grand Bazar at Istanbul is often regarded as one of the first shopping malls of the world.

Is this right time for thish tour? 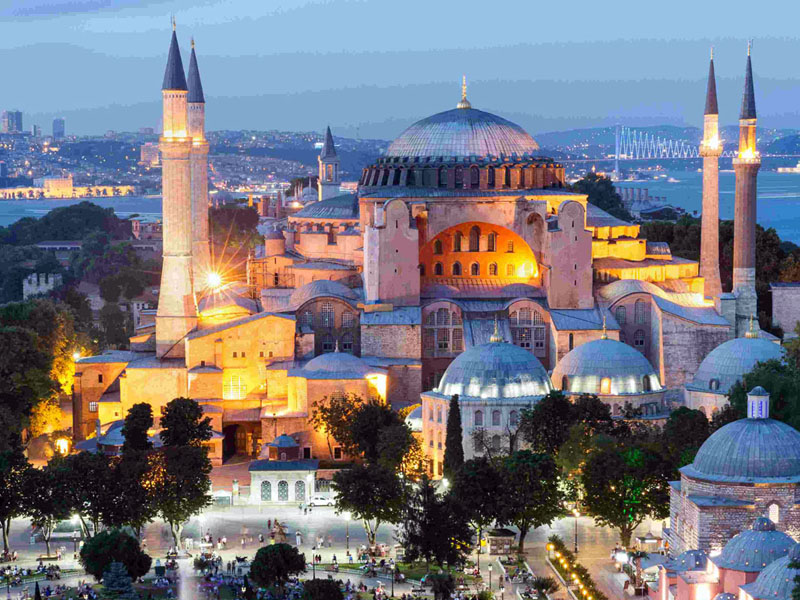